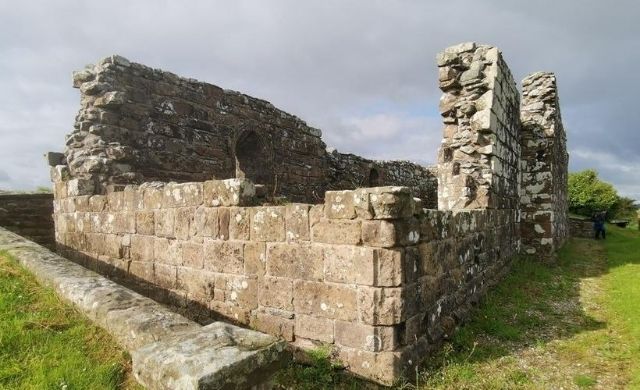 Far too often we are inclined to think that the history of County Derry starts and ends with the London Plantation, but this is a county associated with the names of great Saints and founders of Mediaeval churches like Muiriedach O’Heney, who built Banagher Abbey -the place of the pointed rock or horns.

The church is now a roofless ruin of nave and chancel. It dates back to 100 A.D. and in its day was one of the finest in Ulster.  Only the three feet walls of well-cut masonry remain, but look out for the fine nave window and the massive, lintelled doorway suggesting great antiquity.

Note the jams lean inwards at the top so that the opening is some ten inches narrower under the lintel than it is at the threshold. And carved on the door jamb in 18th-century characters are the words;

The Graves on the Churchyard

But the real treasure of Banagher is to be found in the graveyard. The 12th-century tomb of St. Muiriedach O’Heney, a contemporary of St.Patrick, resembling a miniature early Irish church, a perfectly proportioned stone building with dry stonewalls and a steeply pitched roof, not unlike an old Irish oratory or hermit’s tomb.

At the western end is a much-weathered sculptured carved abbot, which is thought to represent the Saint.  From this appealing little mortuary tomb comes the saying, well known all over Ireland.

‘Well that bates Banagher and Banagher bates the band.’

This saying is said to arise from the magical quality of the sand scooped from the tomb.  The saint is said to have bequeathed to his family and their descendants the unique power of good luck. They say if you throw it at a racehorse he’s bound to win; It is on record of a horse race in 1802 in which one of the horses was sprinkled with Banagher sand and cantered home miles ahead of the field.

People have been known to bring it into the law court and sprinkle it on a witness, or secretly put some into his pocket to force him to tell the truth – so heed this warning, you are taking a chance if you drag a Banagher man into court.

It brings Good Luck in all things and it is said to bring virtue with it wherever it goes and I was told in the hunt for a husband or wife it supposes to be very powerful.

There’s a story told that quite recently a woman sprinkled some sand on her lottery ticket and lo and behold her winning numbers came up.

Some couples building their new house still mix this fine pale brown sand along with the building sand to ensure that the house was safeguarded against fire.  Banagher sand, it seems has even been sent to all over the world to people who have requested it and it seems that the ‘Banagher Luck’ even works abroad.

Tales of the sand been used for health purposes, time and time again but unfortunately, not anybody can gather this sand, it has to be gathered by an O’Heney from the line of the saint itself.

To this day The O’Heney clan -with variants of the name- still come from all over the world to scoop up this sand or earth from a hole in the saint’s tomb and bring it home with them. Strangely enough, there are still families bearing the name of O’Heney about the area.