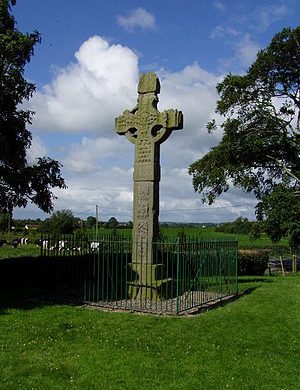 In the middle of the graveyard at Arboe [The height of the Cow] on the western shores of Lough Neagh, the second largest body of water in Europe stands the scant remains of the monastic settlement founded by St.Colman Macaide over 1400 years ago. In his treatise ‘the Great Folly, Superstitions, and Idolatry of Pilgrims in Ireland” published in 1727 by Rev. John Richardson.

“St.Patrick brought three crosses from Rome to Ireland, and St.Colman set one of them up near Ardboe Church on the brink of Lough Neagh. Pilgrims believe that it is better to pray before this cross than in any other place.  They go round it three times on their knees and then leave a piece of silver upon the pedestal. “It was destroyed by fire in 1166, at the time of the dissolution of the monasteries”.

Standing at the entrance to the graveyard stands the High Cross of Arboe, it is, without doubt, one of the oldest and finest antiquities of its kind in Ireland.  It stands 18 feet- 6in high and its arms extend for over 3 ½ feet.  This great cross, with part of its circle broken, is unfortunately enclosed by low iron railings, which seems pointless, but understandable in this age of vandalism.  During a very bad storm in the winter of 1917. The top stone of the cross fell down and some twenty years later other parts began to crumble. The restoration of this particular period in history was made by one of the Stewart family of Killymoon Castle who then owned the land where the cross stands.  High crosses were built between the 9th and 12th centuries and represent the union of the cross and the sun, the union of Christian and Pagan Ireland, the crosses themselves were erected as monuments to victory over death – in fact, a celebration of the redemption of man by Christ. This is an exquisite example of the architectural sculpture in which, up to the 17th century, Ireland excelled.  A perfect example of early craftsmanship, its carvings and sculpture are a unique record of Biblical history.  The scenes engraved are based on appropriate stories from the Bible and the carving is alive with decorative skill, exquisitely molded spiral patterns and generally enlivened by bird’s heads or other animal features; complex compositions of interlacing and knotted cords; the stylized bodies and limbs of men, animals, birds, and serpents.  All these motifs express a miraculous blend of Christian doctrine and pagan nature worship.  Many of the Biblical panels, though weather-worn, are still easily interpreted like on the eastern face, the lowest panel depicts Adam and Eve in the Garden of Eden.

Above it, you can see Abraham offering up Isaac, and Daniel entering into the lion’s den, the flood and the Ark, the Nativity and the Adoration. On the western side, you can still make out Christ chasing the moneylenders from the temple and the Crucifixion of our Lord.  On the Northside, the judgment and Wisdom of Solomon, Cain slaying Abel, and David Slaying Goliath.   Some of the symbols are of uncertain origin.  In total there are 22 panels and when you think of it, here is to be found most of the best biblical stories. It is an interesting thought, that these pictorial crosses were used for teaching purposes at a time when few people except monks could read or write.  It is said that the early mural paintings in churches served the same purpose.   Until the 18th century, Arboe cross was long the object of popular pilgrimage and the lake waters close by was supposed to have curative powers.   You certainly won’t be disappointed with this version of these ‘stone flights of the imagination’.

In the northwest corner of the graveyard once stood a giant hollow beech tree thought to date from the 6th century.  It was slowly dying of oxide poisoning, then one stormy night in the millennium year it was blown down.   This was the famous ‘Pin’ or Wishing tree of Arboe.  Even from a distance, you could have seen the bark of this tall tree stained with the rust of a thousand pieces of metal, pins, old copper coins, nails and any old bits of metal, all the simple personal offerings of wishful people hoping that it will bring them good luck. It seems now that good luck has its own price.  This ancient custom of pressing coins and other objects into trees in the hope of obtaining good luck derives from the tree worship of pagans.  My late father who was born in nearby Stewartstown told me that the oldest discernible coin in the tree dated back to 1899, but the greatest number was driven into the bark in the 1920’s an era of strife and killing in our province, not unlike our recent past ’troubles.’  But the belief most people held, was that if you put something solid into the tree, then you would always come back to fetch it…. many an immigrant has put it to the test, for in County Tyrone, the past never completely dies, it lives in the minds of men and in the countryside they have created.

There was a Holy well [which never dried up, I was told] inside the trunk of this tree and the rainwater was used for a cure for warts that was ‘never known to have failed’

You will note all the headstones here face the east, ancient tradition but also attributed to Christians, who believe that the final summons to Judgment will come from the east.