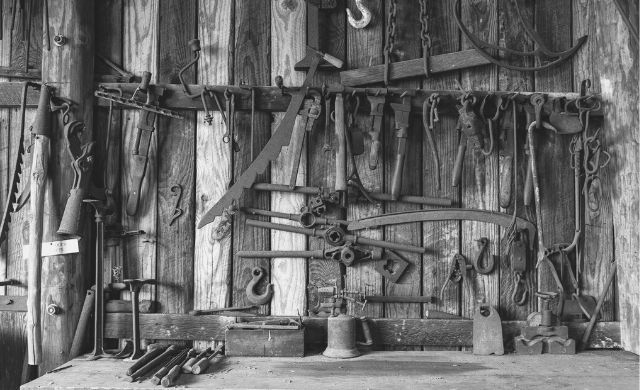 It seems almost incredible that in such an unpretentious place as a blacksmith’s forge a curse was enacted which cause the downfall of a powerful, distinguished and influential family.

The forge in which the curse was enacted was situated on the banks of the River Feale, where three counties Kerry, Limerick and Cork join together. It was owned by a family named O’Donnell Sheehan.

According to tradition, the Freeman family owned a considerable amount of property along the Cork and Kerry border. They were distinguished and possessed a powerful influence with the ruling authorities in Ireland at that time.  So powerful the influence which they possessed that they could obtain a reprieve for men sentenced to death or transportation.

O’Mahony’s property adjoined Freeman’s on the Kerry side of the River Feale. He was a charitable man, considerate to his tenants than many landlords in the county.

Tradition says that some dispute occurred between the two families. It isn’t clear what the dispute was all about, but local gossip says it was either land or a woman the cause of it.  Whether it was or not, it ended up in the Law Courts in Dublin.

O’Mahony kept a string of the best-bred horses in the country.  In the hunting fields and race tracks his horses were often the winners.  A few days previous to the date that the case was to be tried in Dublin, O’Mahony set out for the capital on his favourite charger – a powerful grey horse, with long flowing mane and tail.

The evening O’Mahony arrived he was invited to a banquet.  In those days most of the gentlemen attending banquets were hard drinkers and gamblers. About midnight at the instigation of one of the Freemans, who was present at the banquet, a dose of poison mixed in wine was given to O’Mahony. He died from the effects of poison as the day was dawning.

His faithful charger arrived at O’Donnell Sheehan’s forge as the sun was sinking that very same day that his master had died back in Dublin. The charger had cast three shoes and the fourth was loose. Cantering into the forge, he lifted his shoeless hoof from the ground. Then it flashed into the smith’s mind, something foul had befallen on O’Mahony.

Immediately he shod him with a set of new shoes.  No sooner was he shod that the charger dashed across the river and galloped up the slopes of Knockawinna until he arrived at O’Mahony’s mansion, then he raced at full gallop three times around the house and then dropped dead at the front door.

When the news came through that O’Mahony was poisoned in Dublin, the O’Donnell Sheehan brothers assembled at the forge. There they enacted on the anvil what is called the ‘Creel Carthan’. A curse against the family that caused the death of O’Mahony.

The Creel Cathan’ could only be enacted by the seven brothers of the seventh generation of blacksmiths. The best proof of the power of the curse of the ‘Creel Carthan’ is that within fifty years from the death of O’Mahony the powerful and influential and wealthy family of Freeman was extinct.