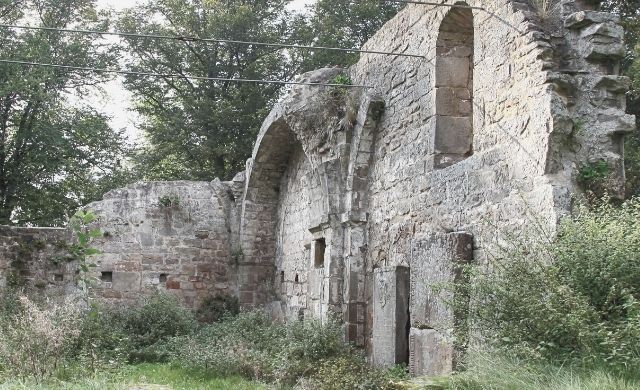 This quaint old graveyard stands about a mile and a half on the south side from Ballynahinch.  This cemetery, in the form of an irregular circle, is of pre-Christian origin planted with yew and cypresses trees. The emblems of immortality.

The entrance to this ancient necropolis is in the form of a stone-built lich-gate, consists of a chamber arched over.   At the end of the stone chamber, there is an iron gate.

On the top of this gateway, there was at one time a watch-house which was erected to foil the gruesome pursuit of body-snatchers or resurrection men whose business consisted of securing ‘subjects’ for anatomy instructions.

It consisted of a watch chamber where the friends of the newly interred kept the watches of the night peering through the squint holes of this curious fortress over God’s acre. Their breath drawn at every little noise and fingers pressed on the triggers of their weapons.

A light, the iron standard shone over the churchyard. Enabling the guardians of the dead to spot their enemies from a lookout post.

The name is from the Irish Machaire-cadar-gawal pronounced Magheraddcool, which signifies the plain between the [river] forks. There are practically no details about the early Christian associations.

The present church in ruins dates back to 1607. According to a document in the Vatican archives, it was built under the joint patronage of the McCartan and Magennis. Therefore, it was a Catholic church though built post-Reformation.

A local tradition says that this old church was used for alternative worship, Catholics and Presbyterians in turn. That it was used by Catholics before the settlers came but I question whether that Presbyterians were allowed to worship there especially under the Church of Ireland regime. The Rawdon family who were staunch patrons of that church and much opposed to the Presbyterian faith.

The internment of so many Presbyterians being accounted for by the fact that the first Presbyterian church in the district had no graveyard, and consequently they were obliged to be buried here.

It was custom in the old church, as in many others in the 18th century, to bury the dead in the pews of their families. There were many recumbent inscribed stones and brass mural tablets at one time.

Also, a vault erected to the memory of the Magennis of Kilwarlin. This and many other monuments were destroyed by a party of the military a few days after The Battle of Ballynahinch in 1798. It is surmised that their vengeance was provoked by the fact that many of the Presbyterian Dissenter Insurgents had been interred by their friends in the churchyard.  Some details of this act are contained in a letter written by Lord Moira to the authorities at Dublin Castle.

As a final note, presently, the Magheradroll’s walls stand in gloomy grandeur as a silent sentinel of time. Keeping ward and watch over the mournful company who repose beneath.